Written by Baris Ergin
Updated over a week ago

DirectIQ allows you to process several lists at the same time. Go to Contacts -> My Lists. Select the checkboxes in the first column near lists you want to work with. Then click on the menu button, that located at the end of the line with the column headers, to open the context menu.

Click Sanitize Lists in the context menu to remove all disabled contacts from selected lists. Then click Sure in the dialog to confirm this action. After the contacts have been successfully deleted, a large banner with a successful message will appear at the top of the page.

You can combine contacts from the different lists into a new one. To do this select lists and click Combine Lists in the context menu. Then click Sure in the confirmation dialog. A new list with all unique contacts from all selected lists will be created with the default name Combined(names of all selected lists). A banner with a successful message will appear at the top of the page.

In order to maximize your list quality there is a need to always check reports and engage in managing contact lists. DirectIQ has automated this process introducing Boost Lists. Boost lists allows you to extract the best qualitative contacts of a list (openers in the last 6 months) 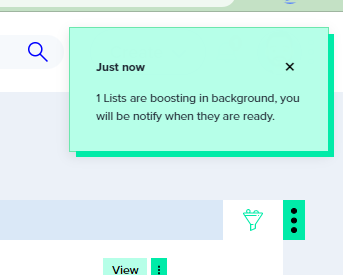 After deciding to boost a list a newly created list named exactly as the original list is saved with the difference of the text (BOOSTED) at the end.

After boosting is completed you receive a notification as shown in the image: 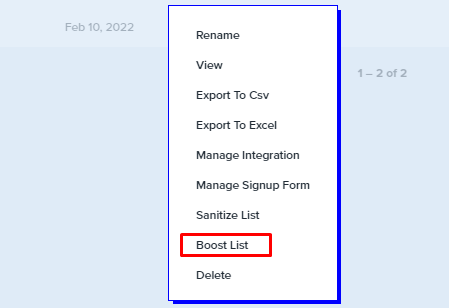 You can delete several lists at the same time. To do this select lists and click Delete Lists in the context menu. Then click Sure in the confirmation dialog. All selected lists will be deleted and a banner with a successful message will appear at the top of the page.

Did this answer your question?